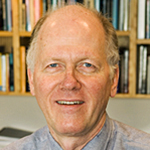 Professor David Van Essen facilitates cooperation between the Centre and the Human Connectome Project and its successor Lifespan Connectome Development and Aging projects, which are generating maps of healthy brain circuits across the lifespan.

The Human Connectome Project was established in 2010 with US$30 million in funding from the National Institutes of Health. The Lifespan Development and Aging projects were launched in 2016.

He is internationally known for his research on the structure, function, connectivity, development, and evolution of cerebral cortex in humans and non-human primates. In 2017, he was elected to the United States National Academy of Sciences.